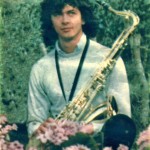 At the beginning he started as a sax player at the Conservatory “Licinio Refice” in Frosinone under the guidance of Baldo Maestri. During this period he was part of a Big Band directed by Gerardo Iacoucci playing in the more prestigious nightclubs of the Capital. He also participates to some television programs (Gulliver, Trenta minuti giovani).

In 1980 a disabilitating accident made him a quadriplegic.

After a few years he resumed the study of music and in 1985 he started to compose with Maestro Daniele Paris and after as self-educated with the collaboration of Maestro Carlo Savina. 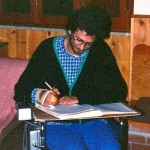 In 1986 he qualified as the second place to the Annual National Compositors in Milan. He composed a few works for some instrumentalist of the Orchestra Sinfonica della Rai, the Accademia di Santa Cecilia and international musicians as the sax players Eugene Rousseau and the soprano Ulrike Simon from the Teatro dell’Opera di Colonia.

He composed a didactic method for violin including original works for young violinists. In 1995 he also published “Cinque pezzi facili” for violin and piano musical publication CURCI in Milan, and in 1996 with the same publishing house “Clown” for bassoon solo. 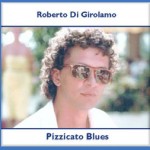 In 2000 he cut a CD “PIZZICATO BLUES” including all his compositions. The CD has been requested by Montreal Radio (Canada) and in Fairbanks, Alaska (USA). Worthy of attention by Giorgio Gaslini for the originality and personality of the music. In 2003, the 8th of June, in Los Angeles, the ”Los Angeles Symphonic Winds” played with a wide success one of his composition. Later, as a sign of deep esteem, Stephen P.Piazza, the director of the Los Angeles Symphonic Winds invited him in Los Angeles.

He collaborates with the Ensemble, Canto di Eea, and in 2004, with the same group, he shows only his own compositions, from jazz to contemporary music, from ballet to sacred music with different instrumental groups. 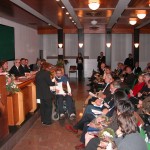 In December 2004 he won the “Prize Immagine Latina 2004” for the artistic merit.

In August 2006 he composed “Piccola Suite” for clarinet and strings  for Francesco Belli and “Latina Philharmonia” in execution directed by Enrique Perez Mesa.

In 2009 he composed for the soprano Maki Maria Matsuoka a piece published in the Matsuoka’s next CD. 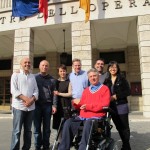 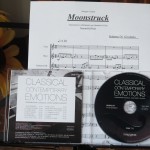 In 2011 he recorded some of his compositions with components of the Teatro dell’Opera di Roma.In July 2013 he published his new CD, “Classical Contemporary Emotions” by Deneb Records, with different stiles and languages of music, executed by several groups of 21 instrumentalists. 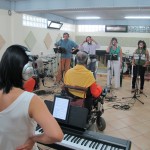 In 2014 he composed the Oratorio “Via Crucis” commissioned by the Valvisciolo Abbey for the 150° anniversary of the monks return in the Abbey, reciting it during the Holy Friday. The Oratorio is a work in progress that will be ready in 2016 in occasion of the Extraordinary Jubilee.

In the meanwhile he organized, as artistic director and composer, concerts in many places in Italy and in Japan with the duo soprano-piano Maki Maria Matsuoka and Carlo Vittori, a project exclusively for Italian composers, from 500s to contemporary with great public success.